How MLO *almost* worked for me as a GTD solution on Android.

When I hit the limitation of Due Today, I did some research and found what I thought was going to be the Holy Grail of GTD goodness on the Android (and Windows) platform.
My Life Organized (In Australia, we spell organised with an “s” instead of a “z”. Still a bit strange to type it with a Z.) is a brilliant solution.
The Android app is small, reasonably simple to install (you have to purchase a code and then insert it into the app. I believe it is a little more seamless through the app store these days) and after an hour or two, reasonably easy to use.
There are two main reasons that I used it extensively for almost a year. Firstly, the Windows app. The Windows app, whilst looking decidedly 1990’s, is pretty powerful. In terms of functionality, it seems to be the equivalent of Omnifocus on the Mac. Ugly as a mangy dog, BUT powerful.
I would do the bulk of my work on the Windows app and use the Android app during the day on the road.
This leads me to the second reason I used MLO for a while. Cloudsync. They use their own servers and you need to pay a subscription fee per year. It felt a little cheeky to pay for the Android app, the Windows app and then subscription for a cloud based service, but it is a pretty powerful solution.
The last time I used MLO (about 3 months ago now) you had to manually get the Android app (and the Windows app now that I think about it) to sync, but I never had a problem with syncing.
Once again, you can smell the big hairy but can’t you?
I was beginning a meeting with a colleague of mine. I got my Android phone out, selected all tasks assigned to the context @Agenda-Chris and only one was listed. I was pretty sure there were at least 4 things in my system to talk to Chris about but for the life of me I couldn’t find them. I fiddled around, whilst apologising profusely to Chris whilst we tried to manage the agenda for the meeting and finally found a “tasks by context” view on the Android app.
The tree view showed that I indeed had 4 items assigned to this context. I hit the line item on the tree view and no cigar. It told me how may I had but would only allow me to view the “Next” task. This is great GTD methodology but the system totally failed me when it came to giving me all tasks by context.
The frustration was quite profound! That particular approach is is totally doable on the Windows client. The only way that I could get a list is to either use my laptop computer in meetings (which often happen in cafe’s) or to print a list in advance from my Windows machine and take it with me to a meeting (or take a quick screen shot with my phone).
I asked the guys at MLO (who are incredibly friendly and responsive by the way!) if it was possible and if I was just missing something but they said that this was in fact how they had designed the Android app. This is an abject fail as far as I am concerned as the majority of my work is meeting with people and discussing lists of issues. Over half my contexts are either individual people or meetings that I attend.
I continued to try and make it work but in the end I had to admit that the mucking around to make it work was taking me longer than actually getting things done.
At that point, I had to reluctantly say goodbye to MLO, as much as I really enjoyed using it, and began my search for the solution that I am using now. More on that in my next post. 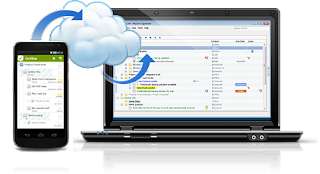 I would be interested to hear if anyone hit the same limitation with MLO, if they have discovered a work around, or indeed if it is now possible to get a view of tasks by context?
at January 05, 2013