Due Today - Another almost GTD solution for Android 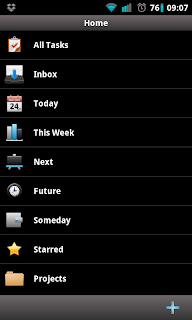 The next GTD solution I tried for my combined Android tablet, phone and Windows PC solution was Due Today.
Due Today is a nice piece of software. It synch’s with Toodledo, it is smooth, clean, beautiful and the developer is incredibly friendly and responsive to questions, comments and requests.
I purchased the app and used the Windows desktop client as well for about a year.
(You can hear the “but” coming can’t you!)
However, eventually I abandoned Due Today for the simple reason that it doesn’t do the one critical thing that I need in a GTD system, essentially that is Auto Next Action.
I spend a few times a week reviewing my projects and tasks, placing then in order and then when I am out and about, I want to view my next actions and then bang through them without having to think and prioritise on the go. With Due Today, as you complete your current actions, you list of things to do slowly disappears until you have nothing left. What you then need to do is go back into review mode and manually promote the next actions from each of your projects (actually setting the status of each task as “Next”) in order for you populate your Next Actions list.
I asked the developer if he was intending on implementing this feature. He did say that this would make the app so much more powerful however it was not a priority in the foreseeable future.
This is tragic for 2 reasons:
The first person to develop a GTD app that does this is pretty much going to rule the roost, once people cotton on to the power of Auto Next Action.
at January 05, 2013

Email ThisBlogThis!Share to TwitterShare to FacebookShare to Pinterest
Labels: Android, Auto Next Action, Due Today, GTD