I used to use Buffer once upon a time. (In a future blog post I will talk about how I figured out how to get the best out of scheduling.) In short Buffer allows you to queue posts to various social media platforms and release your content using a reasonable powerful scheduler. The free account has a significant number of features. 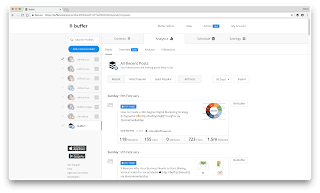 In a previous life Buffer only allowed you to post content to Google+ "pages" attached to your account rather than to your personal feed. Some time between the last time I used Buffer and the most recent time, this has changed.

So I got back on the Buffer bandwagon after an hiatus and am enjoying it once again.